Is National Flood Insurance enough for the average homeowner?

The year 2005 was a record-breaking year of storms in the US, landing that year in the #1 spot of most number of storms (28) and most number of hurricanes (15) since scientists started keeping records in 1851. The years 2010 and 2012 were also in the all-time top 10, signalling that we may be in for more frequent, active and damaging hurricane seasons.

While the number of storms has decreased, claim payments have risen, especially in 2017 as the country recovered from hurricanes Harvey, Irma, and Maria.

The NFIP has been overwhelmed by recent payouts and in 2016 the US government requested that the NFIP look for funding in the capital markets to buffer the blow to the national budget.

In 2017 and 2018, reinsurers only partially insured losses above $4 billion for the entire year. For 2019, agreements with 28 reinsurers have been restructured so that the NFIP would receive monies for amounts above $4 billion for a single event, with additional money for annual losses above that amount. In addition, the NFIP secured $800 million from a bond issuance in April 2019 in an effort to continue to find ways to fund the program and prepare for certain losses.

What type of flood insurance does the average homeowner need?

Flood insurance is a valuable if not necessary coverage for homes in coastal and other flood-prone areas.

While hurricanes can increase the need for flood insurance, floods may also be the result of heavy rains or other natural events. The US Geological Survey estimates that a house with a 30 year mortgage located in a 100-year floodplain has a greater than 25% chance of being flooded within that 30 year timeframe.

The National Flood Insurance Program offers two levels of coverage for homeowners. There is a maximum of $250,000 for a building and an additional $100,000 for the contents of the home.

While this may seem to be adequate coverage, the question remains: is NFIP insurance enough for the average homeowner?

First, the current price of homes in coastal areas prone to flooding can easily exceed $250,000.  The current median price of a home in Florida’s Palm Beach, Broward, and Miami-Dade counties is over $353,000, far above the NFIP cap. A pressing issue is that while the number of storms may not rise above the 2005 peak, the intensity of the storms we are expected to experience is exponentially stronger. Stronger storms mean higher tide surges and more damaging winds, which are a recipe for greater devastation and more expensive claims. 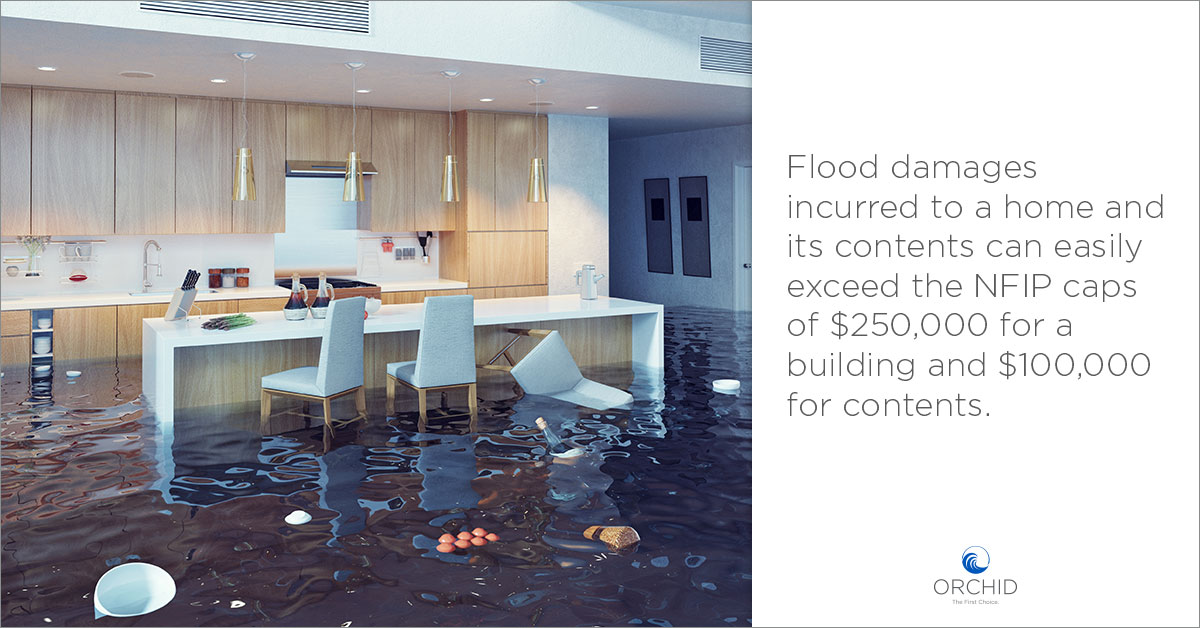 Secondly, a home isn’t the only thing that homeowners will have to replace. One report estimates that the average home contains over 300,000 items. However, the maximum insured value for the contents of a home under an NFIP policy is $100,000, which may not be able to replace high end electronics, appliances, and furniture, let alone daily necessities like food and clothing.  If the homeowner has valuable collections of jewelry, guns, or other high-priced hobbies, the value of the home’s contents can skyrocket far above the $100,000 limit.

Why Excess Flood Insurance is a necessity

No one expects that homeowners’ lives to go back to normal as soon as they get their claim check. But with Excess Flood insurance they’ll have the peace of mind to know that their home will be put back together and they can get on with their lives.

Excess Flood Insurance will insure a home far above the NFIP limit of $250,000 to a maximum of $5 million—enough for most homes, multi-family dwellings and condos. In addition, they’ll be assured that they will have enough to repair or replace the valuable contents of their home far above the $100,000 NFIP limit and pay for any extra expenses they incur while getting their lives back together.

Rates are calculated based on a number of factors, such as:

A home is the biggest investment a person will make in their lives. Leaving it at risk to the next potential hurricane is the equivalent of gambling with their nest egg. No one wants to find out that they are partially protected with NFIP insurance and left with a bill to repair the rest. Few homeowners can afford that kind of out-of-pocket expense especially when they find out how affordable Excess Flood Insurance premiums are.

To learn more, contact Orchid Insurance at 772-226-5546 ext. 239 to find out how Excess Flood Insurance will protect homeowners from the increasing risk of devastating catastrophes.